skip to main | skip to sidebar

I've received my first comments, and in another forum I was asked which hoplitodromos I intended to run: the 1 stade, the 2 stade, or the, "Plataian," 7 stade race mentioned in Philostratus', "On Athletics":

"The hoplite race at Plataia in Boiotia is considered to have the most prestige because of the length of the race and because the equipment (the shield?) reached to the ground and protected the competitor as if he were actually fighting."

The translation is from Sweet's, "Sport and Recreation in Ancient Greece," and I must confess to be intrigued at the thought of a special Plataian event.

We know from Plutarch that the Plataians were great runners. The story of the Plataian Euchidias is one of the Greek tales that has been confabulated in the evolution of the modern marathon. After the Hellenic victory at the battle of Plataia in 479, and despite having just fought a battle, Euchidias was dispatched to Delphi to fetch the holy fire of Apollo. The doughty runner completed his task in a in a single day and night, covering 1000 stades, or 113 miles, round trip. However, the exertion was so great he expired after completing his charge. Like Pheidippides famous run to Sparta from Athens, the feat was proven to be possible by a modern runner. In May 1993 Antonopoulos Panayiotis re-enacted Euchidias' feat (fortunately without expiring).

Despite this heroic effort, on some consideration I am inclined to believe that the Plataian hoplitodromos is a later development. The source alone makes this suspect, as Philostratus was writing about current events in 220 AD. In addition, the shield is reminiscent of the Roman scutum, not the Greek aspis, which never reached to the ground. When you include the relative novelty of the event (it had only been around for 30 years at the time of the Battle of Marathon) it seems extremely unlikely that Philostratus' event has a seven century vintage.

So I will be running the two stade hoplitodromos. That said, I have ordered Sweet's book, as it may contain other interesting information. From what I have seen of the sample online, the hoplitodromos was run in two legs, with a turning post for each runner at the end of the first leg which he likely swung around by gripping with his right hand. These are excellent details that will help make the race more interesting, and who knows what else might be there to be found.
Posted by Nicholas Cioran at 12:27 PM No comments:

The Road to Marathon

The end of 2009 brought news that the government of Greece and various business interests were formally getting behind running a re-enactment of the Battle of Marathon in October 2011 to commemorate the 2500th anniversary of Athen's victory over the Persian Empire. The Greek re-enactment group I am a member of, Taxeis Plataia, was formed, in part, on the hope that such an event would come to pass.

Now it appears like it is a reality, and time to start making some serious preparations for what could be one of the most exciting opportunities in the 20 years I've been re-creating or re-enacting history. That said, all good goals require a focus. After some consideration, I've decided to focus on running the hoplitodromos.

The Battle of Marathon has become inextricably linked with the modern Marathon race. The modern race is extremely popular, but is based on historically shaky ground. It confabulates the tales of Pheidippides run to ask for the help of the Sparta's aid in the coming battle and the run of the forced march of the Athenian army the 26 miles back to Athens after the battle to prevent the city's sack by the Persian fleet. But to my mind neither of these runs is the critical one that occured at Marathon.

Rather, it was a little known race called the hoplitodromos. The hoplitodromos was the last foot race to to be introduced in the Olympic games, at the 65th Olympiad in 520 BC. It is a deceptively simple race; 2 stades in helmet, shield, and greaves.

Its my belief that the event is a direct product of the growing Greek awareness of the threat that Persia's mass-archery dominated tactics presented to slower paced Greek tactics. Missile fire was a fact of Greek warfare of the time, but not the dominating one. It would appear that armoured men advanced in reasonably under desultory fire from lighter armed men mixed into their opponent's ranks, armour, good order, and discipline being sufficient to weather the stings.

But against the Persian's massed archery and skirmishing cavalry this had been demonstrably disastrous, from Egypt to the Greek colonies in Asia Minor and the Ionian sea.

A new tactic was called for, and the hoplitodromos was the product of the new tactics. Armoured men racing 300 stades represents covering the beaten ground in front of archers as quickly as they humanly can. Once over that ground their armour and discipline in close combat would represent a decisive advantage in close combat.

I believe this to be their theory, but all theories require a test. Marathon was that test. Herodotus tell's us that the Athenians, "were the first of the Hellenes to use the running charge against their enemies."

Despite this, the battle was a near run thing. The Athenians had thinned their center so that the width of their line matched the superior numbers of the Persians. On the right flank the Athenian polemarch Kallimachos led a strong force, on the left Athens' only allies, the Plataians were also strong under their leader Arimnestos.

The Persians defeated the Greek center, which routed. But on the flanks Kallimachos (at the cost of his life) and Arimnestos and their men prevailed, and turned on the Persian center, and put them to rout.

The battle was won, in particular because the Greeks had gambled and run a new kind of race, the hoplitodromos.

Now, I've run the hoplitodromos once, in borrowed gear, and coming in last. So my race will be a little different. I'm 40 years old, and strong, but only in moderate shape. Moreover, I've never been any kind of runner. So, with only a little over a year and a half remaining I not only need to put together the armour and weapons neccessary to fit the part, but also prepare myself physically for the race of a lifetime.

This blog will tell the story of my journey.
Posted by Nicholas Cioran at 4:52 AM 1 comment: 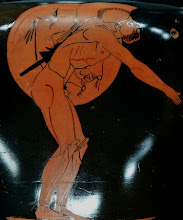